Las Vegas, Nevada, USA (March 29, 2020) BTN — About a month after eight members of the Vagos Motorcycle Club were acquitted in a lengthy racketeering trial, federal prosecutors on Friday dropped all charges against each of their co-defendants awaiting trial, except one. 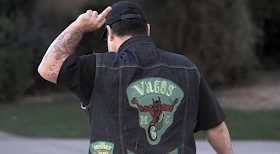 In a three-page court brief, prosecutors dismissed all charges against 11 more defendants.

Prosecutors still are pursuing two counts against one local biker, John Halgat. While a racketeering count against him was dismissed, he still faces charges of conspiracy to possess with intent to distribute a controlled substance, and using and carrying a firearm during and in relation to the crime charged.

Last month, after a trial that started in July, jurors acquitted eight members of the club, including its president on federal charges of conspiracy to participate in a racketeering enterprise, murder and using a firearm to commit murder.

The Las Vegas trial centered around the fatal September 2011 shooting of a Hells Angels leader inside a Sparks casino during Street Vibrations, an annual motorcycle festival.